Trash Wheels are a spin-off series of The Trash Pack. Their 'slogan' is "They're Wheely Gross!"

They are called Trash Wheelies and they are made out of rubber. There are 75 to collect, and there are 4 known playsets as of right now. Vehicles come in packs of 2 and 4, the 4th Trash Wheel is a mystery one. It says you can "Pick 'em up!", "Crush 'em!", and "Wreck and Recycle!" As seen in a video, they also have different colors of the same Trash Wheel Characters.

Trash Wheels can be found in very few Targets and TRU stores in the USA.

The gross gang is on the move with the latest instalment to The Trash Pack line, Trash Wheels! Kids will have a ‘wheely’ gross time racing their Trash Wheels vehicles for a totally rancid Trash Pack showdown. This 2 pack contains 2 super gross Wheelies and a Collector's Guide.

The Trash Wheels 4-Pack makes it easy for kids to add to their gross collection. Kids will find four Trash Wheelies and a Collector’s Guide lurking in this pack to help them identify which Trash Wheelies are theirs. But which wheely gross character will be hiding in the secret compartment of your pack? There are over 83 vehicles to collect with rare finishes including Metallic and all new teams including Litter Buggies, Army Junk, Skid Markz, Rust Buckets and more!

Donutz and Burn Out 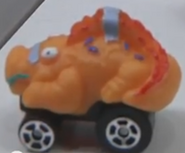 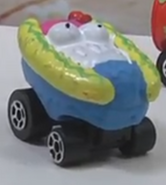 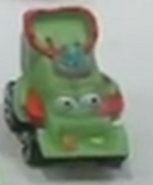 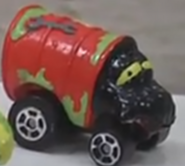 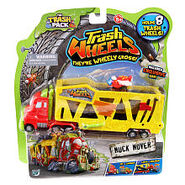 Muck Mover
Add a photo to this gallery