Start a Wiki
Trash Cat is a Limited Edition Trashie in Series 1. He is one of the three chase figures along with Soggy Tomato and King Rat. There are 10,000 in the world of him. He's a cat that has tire marks on his body and injured eyes.

This cacky kitty's fur is full of old fish bones, sour milk and off cat food! His coughed up hair balls are full of moldy maggots, sick sardines and other foul food! If you ever come across this Trash Cat it would be a cat-astrophe! 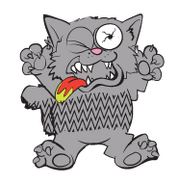 Add a photo to this gallery
Retrieved from "https://thetrashpack.fandom.com/wiki/Trash_Cat?oldid=43574"
Community content is available under CC-BY-SA unless otherwise noted.