The Trash Pack Wiki
Register
Don't have an account?
Sign In
Advertisement
in: Accessories, Playsets, Series 2,
and 5 more 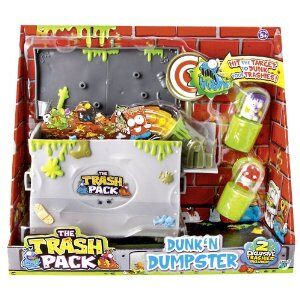 The Dunk 'N Dumpster is a playset that was released alongside Series 2. It comes with 2 Exclusive Trashies, Slime Bucket and Mouldy Mushroom and has holes to place your Trashies in. The concept of this set is to try to hit the target and dunk the Trashies. The back of the packaging shows Slime Bucket standing in a bucket and Mouldy Mushroom is seen hitting the target, hence his big head.

Even though it's a Series 2 release, it includes Series 1 trash cans for the Trashies.

Community content is available under CC-BY-SA unless otherwise noted.
Advertisement